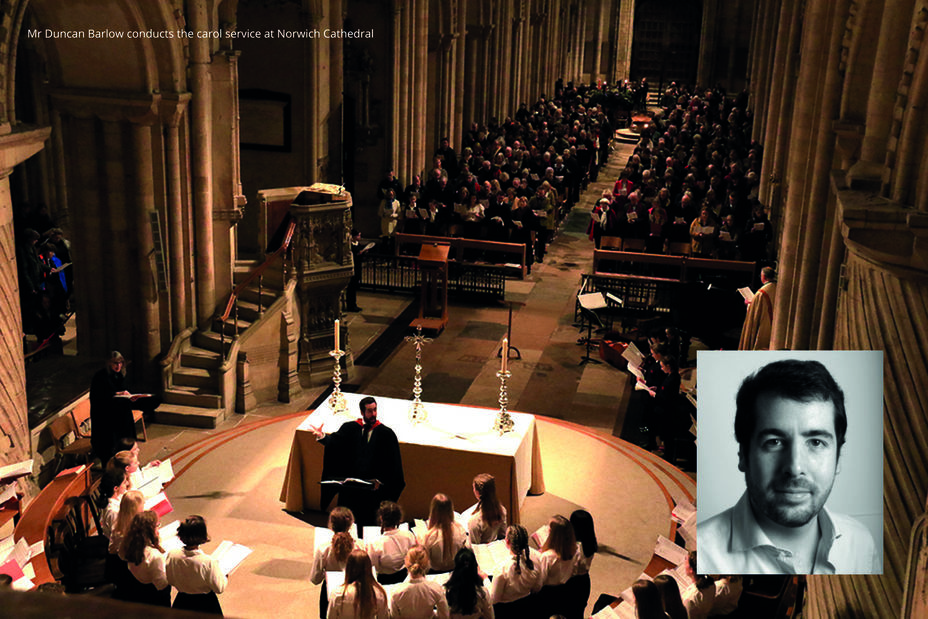 The Governors and Headmaster are delighted to announce the appointment of Mr Duncan Barlow as the new Director of Music at Hereford Cathedral School to succeed Mr David Evans in September 2022.

Mr Barlow was part of an extremely strong short list of candidates and impressed throughout the recruitment process for this important role. In his new position, Mr Barlow will lead all aspects of musical life across the School (age 3-18), including a thriving extra-curricular programme and music outreach initiatives.

Mr Barlow is currently Director of Music and Creative Arts at Norwich High School for Girls having formerly held the position of Head of Academic Music and Assistant Director of Music at Norwich School. He was born in Gloucestershire and educated at Wycliffe College. Mr Barlow went on to read Music and Hispanic Studies at Sheffield University where he was also Organ Scholar of the University and the Cathedral. He later undertook a PGCE and Master's Degree at Cambridge University, where he wrote a thesis on adolescent vocal development and choir training.

In addition to being a classically trained musician, Mr Barlow has wide-ranging interests including Jazz Popular styles and Musical Theatre. He is a pianist, organist, singer and violinist and holds a Licentiateship Diploma in Piano Performance and an Associateship Diploma from the Royal College of Organists. Mr Barlow is very much sought after as an accompanist and is experienced at preparing candidates for Oxbridge Choral and Organ awards.

On his new role, Mr Barlow said: “I am thrilled and privileged to be joining Hereford Cathedral School as the new Director of Music from September and I am immensely looking forward to working with the school’s very talented body of musicians, a number of whom I had the pleasure of meeting at interview.

“My family and I are excited to be moving to join the Herefordshire community in such a beautiful part of the country.”

Duncan’s experience and expertise are exceptional and his vision for developing Music at Hereford Cathedral School was very impressive indeed.

Alongside his teaching and accompanist work, Mr Barlow is also an experienced choral conductor. He was Music Director of the Mid Norfolk Singers between 2012 and 2016, conducting a large range of works throughout Norfolk including Brahms’ German Requiem and Puccini’s Messa di Gloria at Norwich Cathedral and Haydn’s Creation at St Andrew’s Hall, Norwich as well as several regional premieres. Mr Barlow also directed the High Schools’ Choir Festival in 2016 and is regularly involved in educational programmes and events throughout the region.

Headmaster, Dr Gray, is excited to welcome Mr Barlow to the team: “I am absolutely delighted to have appointed Duncan Barlow as our next Director of Music. Duncan’s experience and expertise are exceptional and his vision for developing Music at Hereford Cathedral School was very impressive indeed.

“I am confident that he will take things from strength to strength as we continue our national and international reputation for excellence.”

Mr David Evans, Director of Music incumbent, added: “I'm delighted that someone of Mr Barlow's calibre and experience will be Heading the Music School. We are extremely fortunate in securing such an outstanding musician and it will be a privilege to work with him over the coming months in preparation for his new role in September.”