Remember, remember the fifth of November… a fitting saying for the highly anticipated Apple Cup match between Hereford Cathedral School and Hereford Sixth Form College. On a cold Friday night under the lights at Hereford Rugby Club, both teams took to the pitch for what would turn out to be a thriller.

The scene was set. The game of the year had drawn a huge crowd, with Hereford Cathedral School hoping to right the wrongs of the cup defeat to Hereford Sixth Form College; and HSFC hoping their previous victory would be just the beginning.

HCS kicked off and kicked deep, starting what would be a fast paced and challenging first couple of minutes of rugby. From the kick-off, HSFC had phase after phase before hoisting up what would be the first of many challenging ‘up and under’ kicks to test out the HCS backfield. This one was taken in nicely by Year 11 pupil Gus W, who charged into the oncoming defence but was penalised for holding on, penalty to HSFC. The Sixth Form College kicked to touch and won another penalty from the following line-out, they took it quickly but some strong defence from HCS caused HSFC to knock the ball on. Scrum down, Cathedral ball. The next minute of play was a blur: tackle after tackle after tackle, HCS not allowing HSFC to enter their 22. HSFC received a penalty for all their hard work and decided to take the points; it sailed through the uprights, three points to HSFC three minutes into the game.

The next 20 minutes of play were very back and forth, both sides taking turns defending and attacking. Strong tackles and carries from both sides led to plenty of knock-ons and penalties shared equally between the two teams. Year 13 winger, Freddie R, enjoyed the space his opposite number was allowing him and made metres every time HCS could get the ball into his hands. HCS found themselves enjoying multiple phases of attacking rugby, powerful running and strong clear-outs allowed them to play with quick ball and make their way down the pitch. The same pressure was being applied by HSFC, in the final minutes of the first half they had managed to force HCS to back pedal in defence, causing them to be pinged for being offside. After a very low-scoring first half, HSFC took the three points from the penalty and went into half-time six points up. Everything was pointing to a repeat of the cup game five weeks earlier; could HCS change the momentum and bring home the Apple Cup? 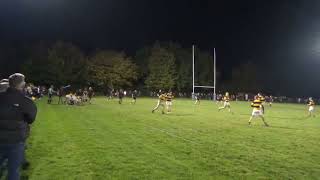 The second half began, and HSFC brought the pace early. A short, high kick-off meant they were able to win back the ball and mount an attack from the get-go. They used the space they created well, attacking from left to right before putting a kick into the back field to test HCS once again under the high ball. HCS tried to run it out but got caught; penalty to the HSFC for holding on. They kicked the three points once again, 38 minutes gone, HSFC ahead by nine points to nil.

The next 10 minutes of rugby was full of fantastic defensive rugby from HCS, which saw them march forward after being awarded penalty after penalty. They looked dangerous in attack before a fantastic interception from the HSFC full back brought it to a halt. It was the turn of HSFC side to mount an attack now. Fifty minutes gone on the clock and HSFC found themselves with a penalty 35 metres out. It was within kicking distance for a kicker who had three from three in what had been a close game, but they opted to kick to the corner in hopes of scoring a try. The subsequent line-out was lost by HSFC - could this be the turning point in the game? Year 13 Sam Y stole the ball from the line-out, and they shifted it out wide to the dangerous Freddie R who once again made metres on the right wing. HCS continued the attack, flowing from left to right before Sam Y slid a pass to put Year 12 Joel W through a gap to take the team into the opposition’s 22. The 500-strong crowd were getting behind them then, before Sam Y and Joel W combined again charging to the line with the final pass being made to Year 11 George K who scored. Charlie P converted, the score 7-9 with 55 minutes gone.

Sixty-five minutes had passed, and HSFC once again found themselves needing to clear their lines after sustained pressure. The clearing kick missed touch and found itself in the arms of Charlie P, who charged up and offloaded to Harry S, who took the team into and beyond the 22m line. Quick ball and quick hands from Year 13 Kai B put George K through for what the crowd thought was his second try, only for the referee to call it back for a forward pass. Five minutes of time left, could HCS snatch this win from the jaws of defeat?

Sixty-eight minutes on the clock and it was the same situation for HSFC, who found themselves needing to clear the ball from their own 22 once again. The kick was better - high and long - but crucially failed to miss touch. Harry S, hurtling in from the deep, looked like he wasn’t going to make it, but pulled out some football skills that Head of Football Mr James could only dream of! HCS were on the attack once again. From the next ruck, one, two, passes and the ball found itself in Year 11 Sam B’s hands. He uses his pace and footwork to shimmy his way through the smallest of gaps and scored under the posts. The entire team, bench included, make their way to congratulate and celebrate. Was this the winning score? Charlie P made no mistake with the conversion. The score was 14-9 in favour of HCS with two minutes left.

Following the kick-off HSFC won a penalty, a chorus of groans from HCS supporters filled the air. A kick to touch and a try to win the game was the only thing people were thinking. All of a sudden, the referee blew his whistle again and rewarded a penalty to HCS. The referee had rewarded a penalty for descent, back chat to the person in charge had cost HSFC the game. Year 11 Ben Y kicked the ball into touch and the game was over, Hereford Cathedral School had won the Apple Cup! The team and the crowd erupted with celebration; they’d done it.

After the match, Head Coach Mr Matt Milsom commented: "First of all, what an outstanding performance from all of the boys, 1-22 all made a major contribution to the final result. I thought we started off a little edgy and struggled to get a hold of the game. We knew coming into the game that the crowd would have an impact and I think we took a while to settle down. Defensively, I thought we were superb again and we tried to play with some endeavour in attack, but just failed to execute early on. Penalties were an issue and are something we will look to clear up before King’s Gloucester on Saturday.

“The passion was evident and I thought the boys showed real resilience in the final 20 minutes. We began to dictate the type of tempo that we want to play at and managed to reinforce our structure and it paid off.”
He continued: “I would like to thank all the families, staff and students (past and present) who came down to support the team and make the evening such a spectacle. The atmosphere and celebration at the final whistle were something that everybody is sure to remember for a long time. I hope that the younger students who came to watch now have an appreciation of what it means to represent the HCS 1st XV and look to replicate the character displayed by those in Blue and Gold themselves in years to come."

A fantastic game for everyone involved. Both sides should be incredibly proud of themselves. Onto next year’s game, will Hereford Cathedral School be able to retain their title? 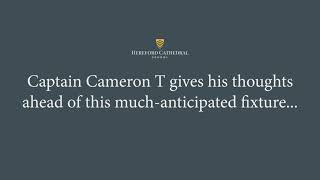